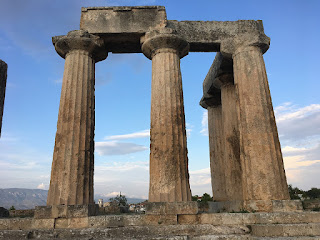 Wikimedia: Temple of Apollo, a major figure of the storybook

Popular posts from this blog

September 23, 2019
The Khasi folktales is similar to the Indian fairy tales in that is a collection of stories. Notably seen in both collections of stories is the prominence of animal characters. Specifically, this aspect is seen in the Khasi folktale The Tiger and the Monkeys . In this short story, the tiger's fear of monkeys is a "real-life" explanation. The tiger seems to have a prominent role in Indian stories, especially when consideri ng the Khasi peo ple are from a state in India. I have also found that the Bengal tiger is the national animal of India, adding to the animal's significance in that area of the world. Again, the premise of the story is to explain why the tiger is afraid of the monkey. Outside research does not really seem to confirm this idea that tigers are fearful of monkeys, so this story may have more regional meaning rather than universal significance. The characterization of the monkey is on par with typical portray of monkeys that I have seen before. The monk
Post a Comment
Read more

August 20, 2019
Wow. It is crazy to think that I am already back in Norman for my junior year. While my first two years were full of unique experiences, I never imagined that I would be a writing a blog to begin my third year! To start off, I am psychology major on the pre medicine track. Ever since I took psychology in high school I found studying the mind and the way people act so interesting. However, I always had the goal of becoming a physician which explains the pre-med track.  Although I am an OU student, I still consider myself a proud Texan. I come from a relatively small town in East Texas where high school football is king and perhaps the most famous thing is that Matthew Mccounaughey graduated from my high school (he even came to our high school graduation this year to give a speech!). Wikimedia Commons : Longview High School Now some other facts about me. I am a huuuuuuggeeeeee tennis fan. I have been playing tennis since I was 7 years old, and played through out high school. N
35 comments
Read more